I had big ideas for the RV. I was going to drive up and down the coast towing my Yaris to SCCA B-SPEC races. But I never got to do that in part because I started suffering from chronic back problems (herniated disc & spinal stenosis). An equally important reason was that after doing an SCCA race, I realized it sucks. Well, for me anyway. I prefer the endurance racing mindset and also, I like being part of a team.

The 318ti was my solution to the one-car problem. I like the practicality of hatchbacks and 4 seats. I already have a FWD racecar, so I wanted something with RWD. I also like BMWs. Oddly, I even like the way it looks. But there were some problems with the engine, and I never felt passionate about the car to get them solved properly. The problem with the engine wasn’t the lack of power, by the way. I like low-powered cars.

I was sad to see the Ranger go. I had a lot of adventures in that thing from the daily commute, to towing over mountains, to driving off-road, to drifting, to track driving. It did it all without complaint (or style). I got rid of it because my back doesn’t want me to do anything that requires a truck.

Given that I recently cleared out 3 cars, I’ve been looking for the perfect track car for about a month. Since I already had  an ideal daily beater (Hyundai Elantra GT), the track car could be completely impractical. In other words, I was considering convertibles.

While the S2000 or ND Miata would be a natural choice, they are not in my current budget. Some day I hope to purchase an ND RF when the used prices come down. I’ve owned 2 NA Miatas before, and I decided I didn’t want to go down the NA/NB path again. Older cars, like Alfa Romeos, Triumphs, Fiats, MGs, etc. are intriguing to me, but I don’t want to work on my car constantly. I drove a Boxster at Thunderhill and it was brilliant, but I don’t see myself in the Porsche Owners Club. Mercedes makes some beautiful convertibles, but there must be some reason you never see them on track. So that left the following vehicles to consider.

The main problem with Z3s is that the differential mounts are too weak for the 6 cyl engines. The repair isn’t simple, especially if the sheet metal has already torn. Z4s have a much more disturbing problem: the electronic power steering fails in weird ways and fixing them requires a lot of labor. NC Miatas have limited roll bar options. There is a nice one from Blackbird Fabworx, but it’s $1250 without shipping. MR-2s have very little trunk space. Ultimately, I think I’d be happy with any of them except maybe the Z4.

Surely 95% of you are thinking “you suck at racecars”. In my defense, I do own an actual racecar. However, it is a Yaris. So part of me agrees. On the other hand, I like low powered cars. They consume far less fuel, tire, and pad. To me, sportscars are about handling not power.

I really like BMW ergonomics. I felt instantly at home in the cockpit. This particular car also came with not-too stiff coil-overs, a bolt-in rollbar, an extra set of wheels shod with Pilot Sport 4S tires, mounting rails for a race seat, a cover, and a bunch of spare parts. 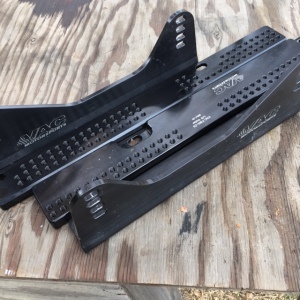