We’re half way through 2022, and in the middle of the racing season. Seems like now is a good time to talk about some of the stupid shit people say to novices and intermediates in the guise of offering helpful advice. I’m sure you’ve heard some, if not all of the phrases below, and sometimes from highly reputable sources. But these weren’t meant to be laws. They were just introductions to the topic. In this series of posts I want to dig deeper into each of these “helpful” lessons and show why they can be bad advice.

Every introductory book gives a description of the racing line. The geometric line is the outside-inside-outside line that gives you the maximum circular radius through a corner. This is in slight contrast to the racing line which has a later apex. Here’s a picture of the racing line from before I was born (and I’m 55).

One good way to think about the racing line is that it’s made up of 2 circular radii, the first one has a tighter radius than the second. This means you do more turning in the first half of the corner and more accelerating in the second half.

So what’s wrong with the advice to “drive the racing line?” I see two problems.

I’ve heard some coaches say that one reason to drive the line is that it serves a kind of check-out role. That is, if a student can’t drive the line, they aren’t ready to go on to the next stage, whatever that is. That’s a pretty low bar. If you can’t drive outside-inside-outside around a track, you probably also have problems changing lanes on the highway or parallel parking.

What’s your line through Turn X? This is probably the most common conversation at the race track. Drivers ask and answer this with such interest and passion that you’d think that this was the most important part of driving. Well, it isn’t. Any driver worth their weight in clag can find a decent racing line. The racing line is generally not what separates fast and slow drivers. What does is mostly competence, but also confidence.

Let’s take a look at the racing line as drawn from above, since that’s the way it’s usually discussed. Here are two drivers going around the same turn in the exact same car, on the same day, in the same hour. The direction is anti-clockwise (Thunderhill T2 in case you’re wondering). Which driver do you think is going faster? 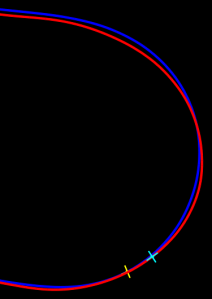 It’s kind of hard to determine the faster driver from the racing line. They both enter the corner very similarly but they have different ideas about how to do the middle and exit. What do you imagine the speed difference is here? One mph? Maybe two? I know, let’s look at a speed graph because it’s a hell of a lot more useful than an overview of the racing line.

The difference between the blue driver and the red driver is about 10 mph. TEN MILES PER HOUR! Do you think that by adopting the blue driver’s line the red driver will suddenly be 10 mph faster? No. Driving on the racing line doesn’t mean you’re driving anywhere near the limit. Each point along the racing line has several dimensions in addition to the longitude and latitude, such as speed and yaw. If you’re positioned on the line but not at the right speed or yaw, you’re not really driving the racing line.

The reason these two drivers are at such different speeds has nothing to do with the line. So stop asking about it. It doesn’t fucking matter.

The question you should be asking

So if you’re not supposed to ask about the racing line, what are you supposed to ask? Ask yourself how close am I to the maximum corner speed? If you can’t answer this question with actual data, there’s no point in giving an answer because your feelings don’t mean shit. The only way to get an answer is to do both of the following:

Recording data is easy. Your smart phone will work just fine. Even at 1 Hz, it will do an okay job of recording your minimum corner speed. However, just because a smart phone will work, doesn’t mean you shouldn’t get a better product. Dedicated devices like an AiM Solo are great, but I have to say that the Racebox Mini I just bought is more convenient, cheaper, and has a higher sampling rate.

The second part is harder. Where do you find data to compare yourself? Ideally, you’re using Track Attack, Race Studio Analysis, or something similar and you have some friends who also record data. But maybe you aren’t using these or don’t have friends to compare to. You can still make comparisons via YouTube. Find someone on similar tires and examine their corner speeds.

Another way to determine if you’re close to the limit is to examine your corner Gs. This requires knowing something about the friction of your tires. If you like math, you can measure the corner radius and then calculate the theoretical maximum corner speed. This too requires knowing the Gs of your tires. For 200TW tires, you can usually get a little over 1.0g.

There are a few times when it’s normal to talk about the racing line:

But most of the time, talk about the line would be better used to talk about just about anything else. Here are some ideas of alternative topics:

One thought on “Big lies of the racetrack: part 1 of 6”