1 week from now we’ll be in the middle of a race. The weather outlook is sunny with highs around 88F. Not everyone likes wearing a coolshirt, but I certainly would be if I was driving. Let’s take a look around the interior.

I changed the Lithium battery in the front to a lead-acid in the rear. The battery box is a kitty litter container strapped to the floor. I got approval for this from JP, the tech chief. It’s just there in case of an acid splash. The battery is actually held down by a hefty aluminum bar. 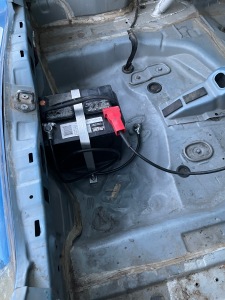 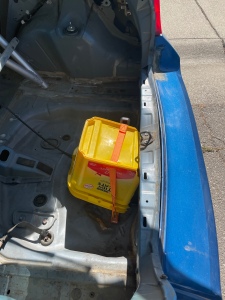 Inside the cockpit, the biggest change is the addition of RATTY. The shifter has a button in the top. The base screws into the stock shifter threads. Yes, I tapped both the button and shifter. The metal in the base wasn’t as thick as I would have liked, so there’s a nut internally that screws in from the top. I didn’t have a very tidy solution for the wiring coming out of the shifter knob, so there’s some tape around it.

You can see the DIY cold box in the background. This is simply a marine bilge pump sitting in a standard cooler. The tubing and wiring come out of the top. It takes about 5 minutes to make one of these since the only thing you need to do is put a couple holes in the top. 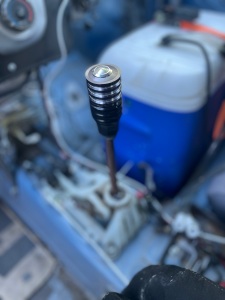 The brains of RATTY (Arduino) are in a black box fixed to the base of the passenger seat with a hose clamp. There are 2 wires coming out of this, one for the shifter button (black), and one for USB power (white).

RATTY talks to my old iPhone 6S Plus via WiFi. Depending on how you press the button, it sends canned messages to a Discord channel. It takes 3-5 seconds for a button click to show up in the channel.

The idea is that the pit and spotters can send status messages to the driver such as “Yellow in T2” or ask questions such as “is everything okay?”. The driver then responds mostly with yes/no answers. 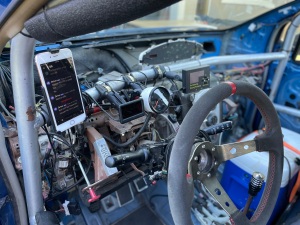 In the picture above, you can see several devices in view.

Just to the left of the red stripe on the steering wheel is a RumbleStrip lap timer. Despite much fancier stuff on the market, this is still my favorite delta timer.

The stock gauge cluster is above the RumbleStrip. We don’t use it for anything other than the warning lights. The speedo doesn’t have a needle, and it isn’t missed since the RumbleStrip displays current speed.

To the left of the RumbleStrip is the tach. The car didn’t come with one, and honestly doesn’t need one. There’s no reason not to run it right to the rev limiter. It’s pretty conservative.

The rectangular screen to the left of the tach is an UltraGuage. This is an OBDII reader that displays up to 8 different things at a time. We use it to track engine temperature, stint time, and fuel usage. It works very well and is not expensive.

The car is also outfitted with a radio. I have spare NASA and IMSA headsets as well as adapters. I haven’t had great experiences with radios, but having redundancy is always a good idea. The radio mounts to the rectangular aluminum bar to the lower left of the UltraGauge.

The iPhone mounts on the far left. It gets fed power from a USB port on the passenger side of the car. Speaking of power, there are 2 12V outlets as well as 4 USB ports (half in front and half in back). The USBs power the iPhone, RATTY, and 2 cameras. The 12V outlets are not used, but exist in case we need to power something else (in the past this has been a Raspberry Pi and a monitor). The UltraGauge is fed power through OBDII and the RumbleStrip and tach are powered directly from 12V.