I’ve been back in the New York recently visiting family and driving my newish-to-me Volvo C30 R-design. The plan for this car was the following.

On paper, the C30 is a pretty good car with 227 HP from the factory. With a few minor modifications, the car can see about 300 hp. While I’m not normally a person interested in power, having more acceleration than my Yaris or Z3 is sort of fun. My first experience driving the C30 in a performance-oriented fashion was an autocross at the Seneca Army Depot (which I wrote about previously). Despite disabling some part of the stability control system, the car would never rotate. It was pretty disappointing. However, an autocross isn’t a race track, and I was prepared to fall in love with the car at New York Safety Track.

I don’t think I’m ever going to drive the pig again. First off, it really is a pig. Despite having decent power and good tires (RT615K+), it’s slower than a stock Miata on 195/60/14 versions of the same tire. It has a case of terminal understeer. Minimum corner speeds were pathetic. Acceleration wasn’t even that good. How do I know? AiM Solo of course (blue is the pig in the photo below). 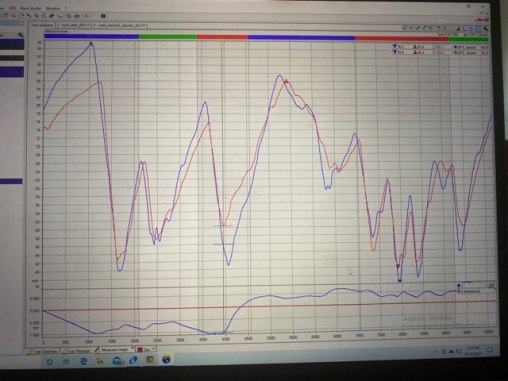 The pig overheated after a couple laps. It didn’t show any indicator lights, but there may have been some text on the LCD screen I couldn’t easily read while driving it. The track thought I was leaking brake fluid and meatballed med, but I believe it was coolant.

I have a Premium membership with AAA that allows one 200 mile tow per year as well as RV towing. It took me 2 solid hours on the phone to get them to understand where to pick up the car: in New York, not California. Also, they couldn’t figure out how to make the tow free despite recognizing my Premium membership. So I had to pay the overage (which I will submit a claim for later).

But wait, there’s more. The tow truck damaged the pig! Apparently they were resting the pig on the oil pan. Whey they released the pig, they unplugged the 2 holes they made and dumped a gallon of oil on to the parking lot.