I just got this advertisement in my email, which describes Handicapped Pro Racing. What makes this “Pro”? Um, cash prize for winning? 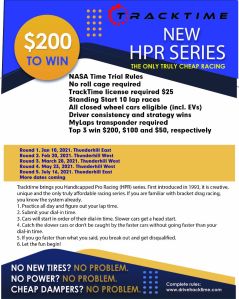 The rules are interesting. Is it a time trial, road race, or bracket race? Well, it’s a little of each. You’re supposed to practice throughout the day to figure out your dial-in time. Once you decide on that, you never want to beat it in the race because you’ll be disqualified. So there’s the bracket aspect. For the event, slow cars start ahead of fast cars and the winner is first car over the finish line after 10 laps. In order to win, fast cars must pass slow cars and slow cars must prevent that. So there’s the race aspect. What’s the time trial part? The minimal safety requirements.

While this sounds like a fun format with all of the cars competing for final positions near the finish line, is this really a good idea without roll cages, neck protection, and fire systems?

Regardless of safety, the math doesn’t work out. Fast cars at Thunderhill lap at around 2:00. Slow cars are around 2:25. After 10 laps, that 25 second differential is 4:10. That’s a couple laps. Put another way, after about 17 minutes, the 2:25 car has completed 7 laps. But after 17 minutes, the 2:00 car has completed 8.5 laps. Meaning, that even if you release the fast cars at the last possible moment, they still lap the slow cars somewhere in lap 7. There are a couple ways around this problem.

Even if you can make the math work out, do you really want a bunch of street cars with HPDE drivers all vying for position on the final lap with cash on the line? This is the kind of dumb shit that’s fine until it isn’t. I have to admit, it sounds like a really fun format if the “racers” respect each others’ space.