With all the interest in iRacing these days, I thought I would do a couple posts about iRacing itself. I’m not going to focus on driving technique or racecraft, but rather the community and service.

In order to move up the license ladder from Rookie to A, you need to improve your SR.  Why do you want to improve your SR? Because with each license class you unlock new series to race in. That’s the only reason. If you’re racing in private leagues, your license generally doesn’t matter.

While SR is supposed to be an indication of your safety, iR turns out to be an even better indicator. There’s no way to get a high iRating without also being a very safe driver.

As a Rookie, you have a default iR of 1250. This is invisible to you while a Rookie. Depending on how well you perform in the Rookie races, your iR might be a little higher or lower when you finally get to see your rating in the D class. In the graph below, at the left end is where racers start: with an iR about 1250. Over time, here measured by how many official racers one does, iR generally increases. But it’s very driver-dependent. Some drivers go up, some down, and some stay the same. Even after 1000 races, some drivers have low iRatings. I think most drivers who aren’t good at iRacing tend to stop racing in official events or maybe they quit altogether.

Not many drivers have a high iRating

The distribution of iRatings is shown below. It’s not normally distributed, having a very long tail. Not many drivers have an iR above 2500. How does one get a high iR? By driving in a lot of races and doing better than average.

Safe but not too safe

The graph below shows that there is some correlation between incidents and iR, but it’s not that strong. It’s possible to have a very high iR and still have 5-8 incidents per race. But once you’re over 10 incidents, it becomes less likely. It’s also interesting to note that some very safe racers have really low iRatings. Driving so carefully that you’re way off pace is not the way to win. 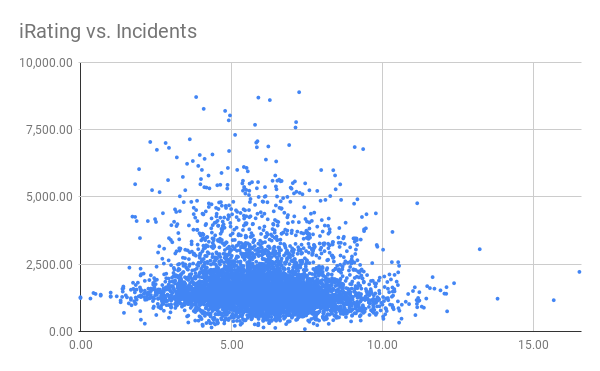 The data here is for all racers ranked D and above in the UK. I tried to get larger slices of the data, but ended up on error pages with no data. It’s probably possible to get more data via an API, but I was lazy and went through the web interface.