Even though my back is fairly well wrecked these days, I went to the track today because SpeedSF had a track day on Thunderhill West in the reverse direction. I had never driven West backwards before, so I was really excited about it. In fact, I had never driven any track backwards, so make that doubly excited. But wait, it was supposed to rain, so I was triply excited.

I had signed up for the Blue (point-by only) group because Tiernan signed up for the Blue group and we wanted to use Sena headsets to talk to each other while we were driving. But then the SpeedSF admins moved Tiernan to Yellow (open passing) because Blue was crowded. So I went in to see if I could switch and there was another driver in the same situation: wants to drive with a buddy but he’s in Yellow and buddy is in Blue. So they switched the two of us without issue  and I ended up in Yellow. Good, because I’d rather be in an open passing group.

The day started with a parade session where everyone went on track with no helmets or passenger restrictions. I got to drive around the track at 10-50 mph and I have to say, it looked completely different! Soon after, Yellow group was on track and I got to see exactly how different it was. I really can’t believe how much the track changed, simply by driving from a different direction. It truly is a completely different track.

By the way, I was driving the GT (2003 Hyundai Elantra GT). I was able to keep up with some pretty fast cars, even though it completely lacks power coming out of corners. I had several people chat me up because they thought it was entertaining watching me drive around corners on 3 wheels. But let’s be frank, it’s a miserably slow track car. My Yaris is faster. The GT handles great, but the powertrain is total shit.

I ended up doing only 2 sessions because my left front melted. Where was the damn rain I was promised? 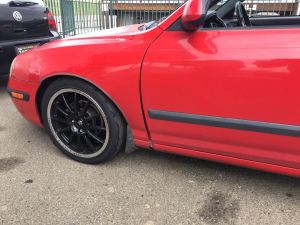 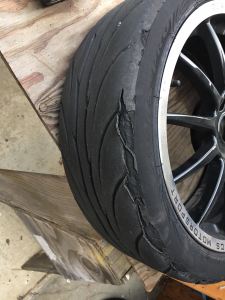 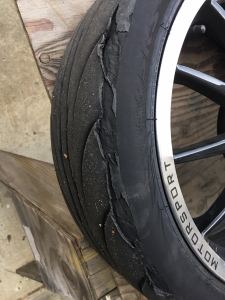 This is my second lap ever of Thunderhill West Reverse.

T10 is an interesting change because you can have a really long trail-brake if you start the corner out wide. Joe, the SpeedSF leader said it’s not necessary to do that because T10 is a throw-away for T9, but in a low power car like mine, it’s definitely advantageous.

T9  is a complete change. It’s now a critical corner because it sets up a pseudo-straight from T9 to T7. The corner itself is really tight, so the minimum speed is low. But there’s no drama afterward, so a high HP car can really shine here. T9 and T10 feel very connected in the normal direction, but not so much in reverse.

T8 is one of the best corners in the normal direction but is not actually a corner at all in the reverse direction.

T7 is just as fucking tight in either direction.

T6 is not very interesting in my car. You just pin the throttle from T7 and ride the inside of the track.

T5 is normally a complete yawn because you enter at a very low speed. But in reverse, the speed is much higher, and this makes the esses much more interesting.

T4 is still the corner you’re most likely to run out of room, but for a different reason. Normally, people apex too early and run out of room at the exit as the corner reduces radius. In reverse, it’s increasing radius and slightly off camber at the exit. So you can go in really hot and then find out the grip is going away. Very fun.

T3 is normally a nail-biter because it’s so fast, but in reverse the speed is much lower. Not interesting.

T2 is very different. You enter so much faster. But there’s tons of camber that I hadn’t appreciated before, and that helps you grip. I threw it in without braking just to see what would happen. Fun happened. It wasn’t the fastest way through.

T1 is probably the most interesting corner. You swoop down from T2 with a great view of the off camber entry. Then it curls around towards the main straight. I think some people might worry about the K-wall on the left, but the speed is pretty low and it’s not a danger.

Overall, I would say that it was a really fun experience and I’m glad I went. Here’s my report card of sorts.

While T5 is greatly improved in reverse, T3, T6, and T8 are much better forward. So there it is: forward is better than reverse. This is the point where some content creators would try to catch your attention by making a sex joke. Pff, YSAR has more class than that.