This weekend, March 7th to be specific, Tiernan and I are signed up to coach at Thunderhill with Hooked on Driving. Between coaching sessions we hope to get a few laps in for fun. So which car do you think will be faster, Ian’s GT or Tiernan’s GTI? Let’s look at the specs.

The GT has the grip advantage being on softer and wider tires. It also weighs 234 lbs less. Is that enough to overcome the 45 hp engine advantage of the GTI? Let’s ask Optimum Lap.

I found a dyno for a stock 4 cylinder Tiburon, which has the same engine as the Elantra. It has a peak of 120 hp at 5500 rpm. The engine apparently revs to 6.4k, but the auto shifts at 6k. That’s a pity because the tractive force graph below shows I could really use those revs. Each curve represents how much acceleration there is at each speed in each gear. There’s a huge drop-off after 40 mph and 74.3 mph. 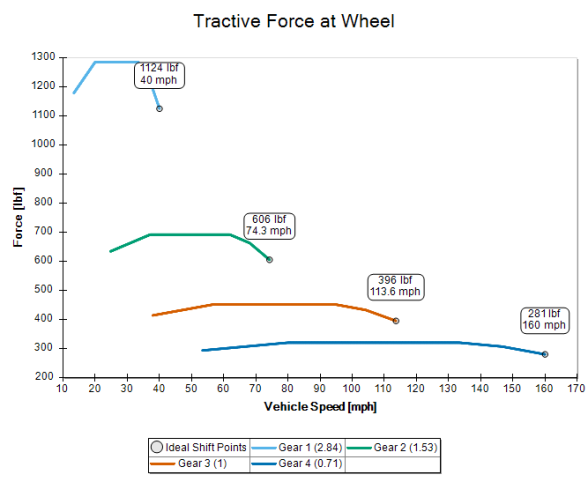 The stock GTI dyno I found shows a peak 149 hp at 6000 rpm. As you can see from the tractive force graph, the transmission ratios fit very well with its engine.

Tires are an absolutely critical component of performance and manufacturers don’t label them with their lateral G limit. That means I have to estimate it. I generally set 200TW tires at 1.0G. With such a round figure, you might suspect 1.0G is more convenient than accurate. Indeed it is. The exact figure isn’t so important, but the relative difference is. Given that Tirenan’s ST-1s are 300TW, I will make a wild guess and estimate that they have 0.95G grip

Optimum Lap says the GTI beats the GT 2:19.60 to 2:21.51. However, the predecessor to the RS-Pro, the RS-RR, was definitely on the sticky end of the 200 spectrum. And my car is both lower and stiffer than Tiernan’s. So if my tire and suspension package is worth 1.05G it turns out my predicted lap is 2:19.28, which would beat the GTI by about 3 tenths. So my best guess is that the GT is near the same second as the GTI.

How accurate is Optimum Lap? I think it’s not bad if you have the right parameters. If I input my Yaris in its pre-B-Spec days with 1.0 grip, Optimum Lap estimates 2:23.40. That’s very similar to my real world fast laps, which were in the 2:22-2:23 range. So the GT should be a little faster than the Yaris when they have equal grip. But there’s only one way to find out. Check back for real world results.