Which is the most important corner on the track? Every track has one, and it’s not always obvious. YSAR reader Eric recently shared some AiM Solo data with me that got me thinking about this. The event was last month at Oregon Raceway Park in the Lucky Dog Racing League. While I’ve never been to ORP, I have driven it in simulation (rFactor2) and it’s at the top of my bucket list due to its mixture of elevation, camber, and corner geometries.

Take a look at the track map below and try to figure out which corner is the most important one. While ORP can be driven in either direction, let’s consider the clockwise direction, which follows the black turn numbers from 1 to 16. 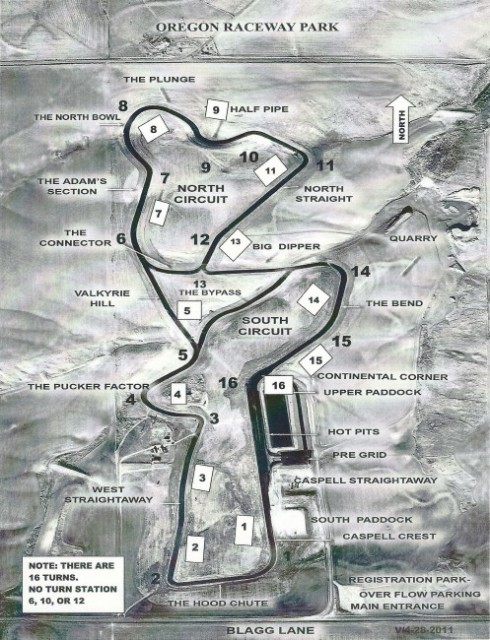 One of the reasons I was eager to look at the telemetry data was because the team had Randy Pobst drive one stint. I’ve never examined the data from a pro driver, so I was eager to see what he’s doing differently than us amateurs. The difference between Randy and the team hotshoe was about 1 second, and the specifics of those differences are mostly about backing up the corner, a topic mentioned on YSAR plenty of times. When you look at lap times that are 3-5 seconds off, it’s some mix of the following:

Randy is a professional driver, and I don’t expect anyone on my team to match his lap times. I’d be over the moon if someone was within 1 second. Heck, 3-5 seconds off is fast enough on my team.

8 thoughts on “The most important corner”