In the picture below you can see how simple my race operation is. I flat tow my Yaris behind a 3.0L Ranger. It’s a very flat route so the 145 hp Ranger has no problems towing the car and gear. I arrived at the track at 4:30 the day before the test and tech day to try to get a good pit spot. I wanted something under the awning so I could shelter the pit from sun/rain. Mission accomplished.

Tech was a breeze. The car has raced in several other series and all the safety issues are well sorted. We got into the B class with zero penalty laps. That was what we expected.

We had decided that the full test day was too expensive. $349 for 1 driver and $149 for each additional. We considered doing the half day at $249 + $100 but then decided to play a joke instead. People walked by and  puzzled: “why is the wing on the front”. We dead-panned “it’s front-wheel drive”. The look of disbelief on Daniel and Mario’s faces was worth the effort.

The weather forecast changes hourly. The latest news is that Saturday should be dry all day with a high of 78. Sunday may be wet in the morning. I told the team I get to drive the wettest stint. That may screw up driver order, but as team owner, I’m putting my foot down on that. There’s no way I can keep up with the fastest cars on a dry track, but give me puddles and let’s see who comes out on top. 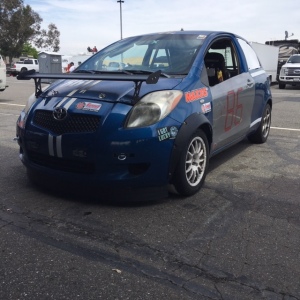 The race day didn’t start the way we wanted. Our first driver got 2 black flags. One of them was for going off track to avoid a collision. I’ll take a black flag over dents any day. But 2 black flags pretty much put us out of contention. Also, there was some blisteringly fast B cars we could never catch. Our second driver didn’t like the way the car was driving. Actually, neither did the first driver. When I asked if the rear had no traction, he said neither end had traction. Puzzling. So we decided to turn the rest of the race day into a tuning day.

The first thing I thought was the brakes are still mushy. The pedal starts hard but just mushes out and goes to the floor. That’s really disconcerting because it gives you very little brake feel. And without a firm pedal, it’s pretty hard to heel-toe shift. Oh well, I just did more straight-line braking and eased in the clutch. Not ideal, but I’m okay working around problems. It’s likely an aging master cylinder.

The next thing I thought was that the 225 RS-RRs 15×9 aren’t that much different from the 205 15×7 I had run in earlier races. The tires don’t actually feel very fast. Part of that is because they are miserable under braking. They slide way too easily. They aren’t a particularly loud tire, like say the NT-05, and in 225 they are definitely on the quiet side. I started to understand why driver 2 thought the car had no grip on either end. The RS-RR doesn’t feel like it stops very well, so it appears to have no front grip. But once you get into a corner, it’s side grip is really good and overwhelms the thinner and harder rear tire, leading to oversteer. Mario said it was a lot of work just keeping it on track. I didn’t get to try the 615K+ rear setup, but the RE-71R rears felt pretty well planted.

While the car felt like it had better acceleration at low speeds, surely due to the weight loss, the drag was noticeably higher. This may be because the cut down doors don’t have mirrors or the wind deflectors I added. So the inside of the car turned into a parachute. It meant that top speed on the main straight was just 90-91 mph, or about 5 mph lower than usual. That didn’t stop me from having fun though. I managed a 3:43 in my few laps on track. You can see the entire stint in the video below (quality is not good because Windows 10 Movie Maker sucks. I may re-encode this on my Mac later in the week).

The forecast was wrong. We arrived at the track to find it drying. I was expecting a lot of rain early so I could one-up some fast cars but it just wasn’t very wet. Discouraged, I decided not to drive first. Danny drove first and while he was out we got our pit crew member, Tiernan, a driving wristband. He got in the car next and despite all the warnings about the blind turn 9C that connects the East and West tracks, he did what a lot of people do, and drove straight though. When he got to the penalty box, they decided to throw the book at him. My book. I had dropped off about 15 copies of the book to be sold for the Alex’s Lemonade Stand charity. Tiernan’s penalty was to read a passage from the book while being filmed. If it doesn’t make the Lemons wrap-up video, I’ll post it here.

The rain started picking up and it seemed there was enough rain to have a bit of fun. And fun was had. I got my wish and was able to dice with the fastest cars on track… and beat them.

Mario drove next and also had a blast splashing around (in the muck and the mire). But then the track started drying and he decided it just wasn’t as much fun. We wanted to get Daniel and Tiernan back in the car one more time, so they split the time on a mostly dry track. In the end, we were 56th out of 110 entries, or something like that. After we realized we weren’t in contention, we relaxed and had a lot of fun. This weekend reminds me how much fun Lemons is. That said, Lemons is changing, and not necessarily for the better. I’ll comment on that later.