If you’re joining this post in the middle of the series, go back a few weeks to the start and read those. There’s software and data to download.

When thinking of advanced driving techniques, two of the most common topics are rev matching and left-foot braking.

The way iRacing models a manual transmission is somewhat of a joke. You can shift the car into gear seconds ahead of the shift and then quickly bounce the clutch to change gears. If you look at clutch traces, you’ll see that most upshifts are incredibly quick because of this. You can also choose to have iRacing blip the throttle for you on downshifts. Doing so gives a slight penalty to your lap times because there is a pause before the throttle is fully activated. Some drivers don’t cheat on downshifts and do their own rev matching. Let’s load up Andrew Barron’s 1:42.279 lap to see what that looks like. 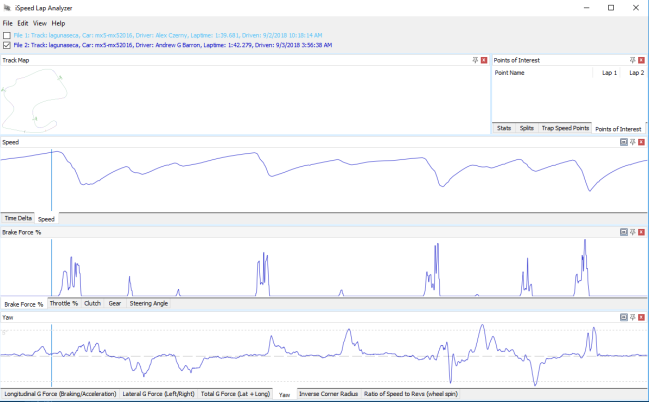 In the figure above, I’ve got the brake pressure selected rather than the clutch. But what you see is incredibly ragged. If you cycle between clutch, brake, and throttle, you’ll find that his feet are pretty busy in this section. The reason that his brake trace has valleys in it is because he’s also using the clutch to slow himself down. Why? Partly because he stepped on the clutch too soon. If you do that, the revs start to fall and you’ll have to spin up the transmission again to match speeds. Gradually letting out the clutch is a sign that you didn’t match revs at all. Andrew’s lap time is actually pretty good compared to others we’ve looked at. That’s because he’s been a member of iRacing for 7 years. Unfortunately, he’s perfected a suboptimal way of driving.

There’s an old saying “in a spin, two feet in”. People who try to recover from spinning often end up crossing the track several times, taking out multiple nearby cars. The two feet in question are on the brake and the clutch. The clutch application is so you don’t stall the car when it comes to rest. This reminds me of my very first track day where I spun and stalled… Hey, we all start from somewhere, and I started at good old rock bottom.

But wait, there’s another kind of driving with two feet in. It’s called left-foot braking, which is often abbreviated LFB. It’s easy to determine if a driver brakes left-footed because the brake and throttle traces overlap for extended periods (not just when blip shifting). Most Formula 1 drivers brake with their left foot. Also lots of ass-idiots on US freeways. LFB is an advanced skill when done properly and a source of amusement when not. 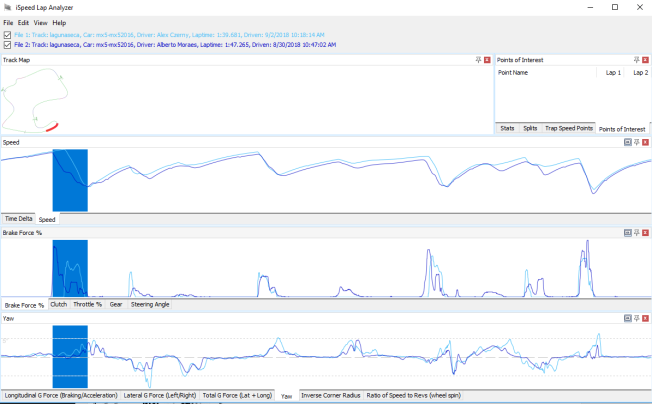 The first thing you will notice is that Alberto’s speed trace shows really gradual deceleration in turn 1. This is highlighted in the image above. If you don’t look at the braking graph, you’ll assume it’s because he’s braking too softly, much like Bastian last week. But upon closer examination (click the brake tab) you’ll find that his initial brake pressure is actually higher than Alex. But he’s also got the throttle pedal on the floor at the same time! He eventually releases some left foot pressure but it’s synchronized with the right foot. Both feet in, both feet out. If you look across the whole lap, you’ll find that his foot is on the throttle to some degree pretty much all the time. This must be a carry-over from driving a single-speed go-kart where he’s trying to keep the revs in the power band. It has no place here. Common sources of track driving errors are skills learned elsewhere. Possibly the most insidious are street driving habits. But that’s a topic for another day.

Now load up Joshua Homan’s 1:42.730. This is a pretty fast lap compared to the others we’ve been investigating.

If you look at the brake trace, you can see that Joshua has good technique. He hits the pedal hard and then modulates it as he steers into the corner. Switch from brake to throttle view in the highlighted region and you’ll see that he stabs the throttle a lot while braking. Not just here, but every corner. He’s late on throttle because he’s braking too late and trying to make up for it mid-corner.

As an aside, if you look at the throttle trace you’ll see that there are huge regular dips at the shift points. That’s because he’s using an automatic transmission. This slows the car a couple tenths over the entirety of the lap. It’s not a big deal until you’re trying to chase aliens.

I don’t feel that strongly about rev matching. If you shift really late in a corner, it’s not really necessary. That said, I almost always rev match. And while I’m against using the clutch as a brake, there is one corner on one track where I do it to help rotate the car. In any case, if you’re going to rev match, learn to do it correctly. If you’re constantly feeding out the clutch gently, you’re driving poorly.

I don’t practice LFB ever. I do see the advantages though. Some of the fastest drivers set up their cars with extra rear brake bias. While a normal driver might find this hazardous, those who practice it can use the brake and throttle against each other to dynamically change the balance with great precision. Brake bias is something we normally set up in the paddock. If we’re lucky, we might have an adjustable bias control in the cockpit which we can change if it starts to rain. Advanced LFB-ers can change it mid-corner as they modulate brake and throttle. That’s pretty awesome. Having both feet on the pedals means there’s no delay between getting off the brake and on throttle. If you’re searching for every tenth of a second, there’s a good reason to learn to LFB. If you’re an endurance driver who cares a lot about wear on the car, there’s not much to gain.