The end of the 2018 YSAR Author Contest is just 1 week away… click the Contest link at the top of the page if you want to win some cool prizes.

Last week we discovered we can get telemetry software and data for free from iSpeed. We’re going to be using these for a few weeks to examine exactly what separates the fast from the slow. At the end of the post last week, we loaded up the fast laps from Alex Czerny and Bastian Stirl for the iRacing Global MX-5 Cup at Laguna Seca (Season 3 Week 4). The reason we are focusing on the Global MX-5 Cup is that the series uses a fixed setup. So you’re not allowed to change suspension settings, tire pressures, fuel load, or anything else. This will let us focus on the difference among drivers rather than setups.

Let’s load up Alex and Bastian again and talk about one of the most common problems of inexperienced drivers: braking backwards. If you don’t remember how to load laps into iSpeed, look back at the post from last week. The proper way to brake is hard on, soft off. You should get to maximum brake pressure very quickly and then modulate it from there. Many rookies like Bastian brake gradually at first, realize they need to brake more, and build brake force as they slow. When they’re done, they snap their foot off the pedal. Releasing the brake quickly causes the suspension to rock, unsettling the car. It’s the opposite of smooth. Why then is it okay to hit the brakes hard initially? Because at the start of the braking zone you’re going in a straight line. At the end, you’re turning and need the car as quiet as possible to maximize traction.

The highlighted region in the image below shows how completely different Alex and Bastian apply and release the brake. 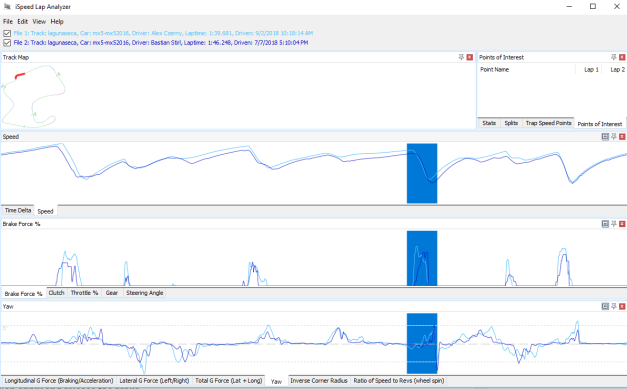 In slow, out fast

Let’s replace Bastian with Roy Johansson’s 1:48.367. I’m sure you’ve heard the phrase “in slow out fast” before. Your instructor told you to drive that way because he wanted to survive the day, not because he wanted you to be fast. While it is true that you need to slow down to enter a corner, if you put too much emphasis on the slow you’ll end up with terrible mid-corner speed that you can never recover from. Roy brakes hard for every corner whether he needs to or not. And in a lot of places, he doesn’t need to brake at all. This is what I see from a lot of HPDE drivers. When they do get to throttle, they can go very quickly to 100% because they’re going so damn slow. It’s easy to be full throttle at the kink (or whatever) if you brake unnecessarily hard and kill your speed. 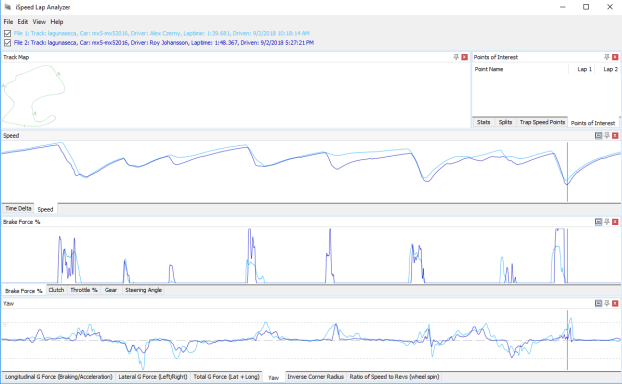 Hard on, hard off 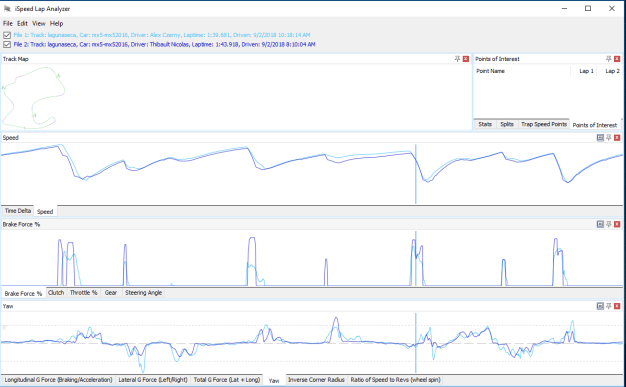 This lap is a good deal faster than the previous ones. This is the typical braking pattern of the intermediate driver. Notice how the brake traces all look like rectangles. The driver is no longer scared to use the brake pedal, but they don’t have any finesse. The brake pressure trace shows that the brake is either 100% on or 100% off. A high horsepower car can get around a track pretty quickly by mashing one pedal or the other, but it’s by no means optimal and no way to drive a momentum car like the MX-5.

Another problem with snapping off the brake is that the weight quickly transfers to the rear. With less weight on the front wheels, the car has less grip to turn. And this is happening at corner entry right when you need that grip the most. People who complain about understeer should examine how they release the brake. The two are highly related.

Soft on, soft off

The opposite of hard on, hard off above is of course soft on, soft off. Load up the fastest lap by Mark Turek (1:44.412) to see what that looks like. 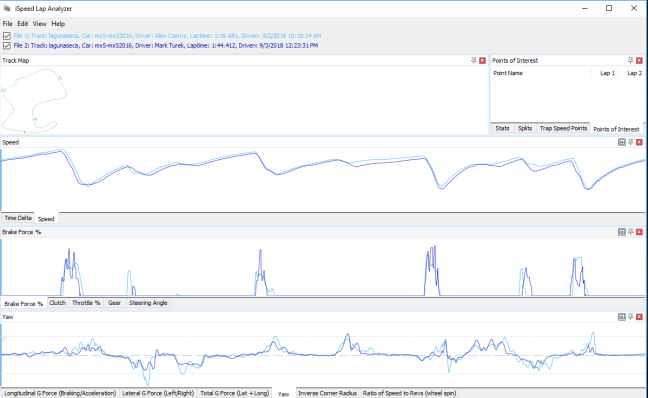 The brake traces here look like isosceles triangles. Although Mark trails Thiabault by a half second, I think he’s actually driving much better. He’s easier on the car and his brake modulation is a critical step in improving his driving skill.

So how do we go about correcting these braking problems exhibited here? By practicing the fundamentals correctly.

Check your telemetry trace. Do you get to maximum brake pressure instantaneously? At the end of the braking zone, does the brake pressure taper off? If the answer to either of these question is no, you need to practice until the answers are both yes. This is a fundamental skill in the way that hitting a tennis serve out of a backhand grip is fundamental skill. If you keep serving out of a forehand grip, you’re perfecting a high risk flat serve that will see your opponents feasting on your weak 2nd serves. If you ever want to get out of the intermediate ranks, you have to hit top spin serves. And if you ever want to become an advanced driver, you have to learn how to use the brake pedal.

It is amazing how many drivers, even at the Formula One Level, think that the brakes are for slowing the car down. — Mario Andretti

In case this isn’t crystal clear, he’s saying that brakes are for turning the car.

One thought on “Ghosting the Aliens: part 2, braking bad”