Yes, I just quoted myself. Well, if a blog is anything, it’s self-serving. Let’s talk in more detail about the typical progression from driving the engine to driving the suspension. But not without first taking a detour into tennis.

The following photo comes from a blog on Learning the Different Types of Serve. People who know tennis will laugh at this photo pretty quickly. Not only are the players in the receiving court in the wrong position, but the guy has absolutely no idea how to hold a racquet. This is as bad as the Thrashin’ poster a few weeks ago with the dude’s wrist guards on backwards. 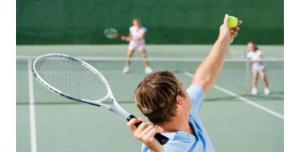 Serving is a complex motion that takes a long time to learn how to hit properly. In the beginning, players use a forehand grip (like the photo above), swing in a circular arc from head to toe, and possibly use a wrist snap in an effort to get more power. At the end of the stroke, their racquet is pointed at the ground. If they follow through, they are in danger of hitting their shins. Examine the next photograph, which shows the follow through of a proper serve. What do you notice? 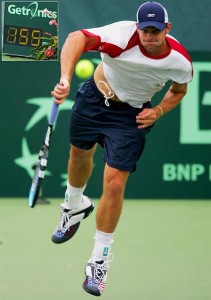 The racquet is in front of the body, nowhere near the shins. The elbow is nearly as high as the shoulder. A proper tennis serve starts by holding the racquet in a backhand grip. The racquet is swung up and out, not circularly down. The follow through sees the arm pronating as it extends. That might look like a wrist snap, but it’s a rotation at the elbow. The palm ends up facing away from the body, not down at the ground. It’s a complicated motion that feels unnatural to novice players.

Track driving also features some unnatural feelings in the beginning. But over time they start to feel ok, then good, then just how it’s done. Let’s talk about the typical stages a driver goes through. Well, in my experience anyway. It’s not always the same order, and there are probably some other steps along the way and afterward. I’d be interested in hearing opinions on that.

People who don’t know shit about track driving are generally concerned with the performance of the engine. When random people hear you drive a car on a race track, what’s the first thing they ask you? “How fast do you go?” Driving fast in a straight line is sort of thrilling for a little while, and many of the novice students I see come and go with that in mind. Part of the interest in going fast is to experience the awesome engineering in sports cars today. Well, there’s even more to appreciate in how well they do the twisty bits.

In the next stage, drivers know the racing line, but they take the phrase in slow out fast a little too seriously. They slow down to a crawl, tip-toe through the corner, and floor it at the exit. They think that because they went in slow and out fast that they cornered correctly. These drivers may exhibit heel-toe shifting, because they want to be in the correct gear, since they’re still concerned with maximizing power. But the technique is often lacking and they press the clutch in way too early and let the revs fall. It’s also typical at this stage to drive a mostly circular arc through the corner. This leaves the car mid track at the exit and then the driver steers out to the apron because their coach told them they were supposed to use the whole track. Most of the drivers I work with in the Hooked on Driving Novice group are at this stage.

As drivers become more confident, they stop coasting into braking zones and learn to threshold brake. These drivers exhibit a point-n-shoot driving style where they drive hard all the way to the braking point, hit the brakes hard, corner mildly, and then hit the throttle hard. It’s a fun time blasting your car in and out of corners, even if you don’t do it optimally. And high performance cars can get around a track pretty quickly like this. Lots of HPDE regulars settle into this style of driving. When their lap time stagnate, they buy a faster car. Too bad, because they would improve more by learning how to drive a momentum line with a slower car.

Some, but not all drivers, go through a hooligan phase where they have become enamored with burning rubber. Let’s face it, drifting looks cool and feels amazing. Although it’s not the fastest way around the track, it’s fun and requires some skill with the throttle pedal. What the hooligans misunderstand is that rotation in the corner isn’t supposed to be initiated with the throttle. I don’t get to see many hooligans as students. I had one, who broke the mold a bit as she was a 60 year-old lady. While she smoked the hell out of her tires in the figure 8 drill, she was clumsy and slow on track.

The next phase is characterized by mid-corner tire squeal. Grip junkies can drive a car pretty damn hard. They aren’t necessarily consistent, especially at setting their corner entry speed. But their fast laps are truly fast. These drivers tend to open up their steering in the second half of the corner to maximize their traction. Some may be very good at countersteering. Although rare, I like working with these students because they are confident in their car control skills, just not refined. Sometimes it takes just a few words to get them changing their driving style for the better. I think a lot of HPDE coaches are at this stage.

Every corner has an optimal speed. If you enter too fast or too slow, the exit will be ruined in one way or another. So one of the primary goals of the advanced driver is arriving at the nadir (the point of lowest speed) at precisely the correct speed. Trail-braking helps you sense your speed because the self-centering torque of the steering wheel gives you critical tactile feedback.

The next stage of development sees drivers trying to optimize traction everywhere on track. Everything is a compromise and identifying the optimal inputs is a continual experiment as the car, track, and environment change. Balanced-focused drivers are concerned with making every transition, be it speed, direction, or gear, as smooth as possible. So they are tuned into their suspension to optimize their contact patches. They drive the capabilities of the car, they don’t ask the car to drive to their ability.

Why is smooth so important? In mathematical terms, it’s because tire load is sub-linear with grip. In seat-of-the-pants terms, you can’t get back traction you lost. Paradoxically, some very smooth drivers don’t look smooth from the cockpit. Don’t watch their hands, watch the attitude of the vehicle. Is the suspension quiet or is it rocking?

Some drivers are so damn good that they don’t even think about driving. Their minds are capable of completely independent thought while driving a car at the limit. If they’re technically-minded, they’re analyzing the behavior of the car to improve it later. If they’re competition-minded they’re figuring out the strengths and weaknesses of the drivers around them. If they’re assholes, they’re messing with their opponents’ heads. (That was Ravenclaw, Gryffindor, and Slytherin by the way. Hufflepuff is still in the pits helping some poor dude fix a throttle cable).