I have a balance board in my office. So does Ross Bentley by the way. I love Ross and everything he teaches, but I wasn’t shamelessly copying him when I got it. I only found out later he also has the exact same one. Racing is a kind of balancing act. You’re trying to maximize your contact patches through changes in speed, camber, temperature, surface conditions, etc. But that’s not really the reason to use a balance board. They are really different activities and I don’t think there’s much cross-over. The reason to use one is that it improves the motor skills of the foot, which is pretty important for throttle and brake control. It also increases core fitness, which is important for just about everything. 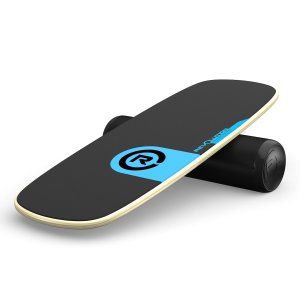 I have neglected core fitness for a long time. I’ve done a lot of exercises, like sit-ups, really incorrectly. 50-ish years of ignoring my back recently put me in a bad way. My back pain was so terrible that I could barely walk, sleep, or do anything at all. So I took a lot of ibuprofen. Too much actually. It did allow me to drive at NYST and Pineview, but I ended up skipping Shannonville the next day as I felt terrible. I say too much ibuprofen because I stepped on a scale and found that I had gained 14 pounds in 9 days. Sudden weight gain can be a sign of kidney failure. I went to the ER and they said to lay off the ibuprofen. I lost the weight over the course of the next week and I’m not sure I’ll ever take pain meds again. X-rays show some arthritis and disk degeneration. So I’m now trying to become educated in back health as one of my highest life-long goals.

Back to balance. The first time my graduate student Hannah tried using my balance board, she could not stay on it for more than a second. Undaunted, she kept at it, but never really improved. Maybe 1 week later she tried again, and suddenly she could do it for a few seconds. She did absolutely no training in between. A few weeks later, she steps on again, and this time she can drink tea while balancing. The last time she tried it, she could have a whole conversation while balancing. In the picture below, she’s experimenting with different ways of standing on the board (here, a bit more of a surfing style). 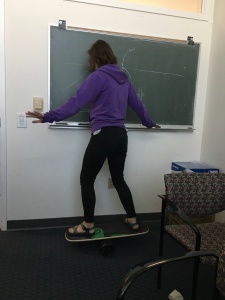 How did she get so much better without ever practicing? Time. It takes time for your body to learn new activities. How much time? I don’t know, but I would guess a few sleep cycles is important. I think it would be better to do two track days 1 week apart than do 3 track days in a row. I don’t think this kind of learning without trying works very well at the intermediate or advanced levels. You really need a disciplined training schedule at some point or your skills will plateau and eventually degrade over time. But if you’re just starting out, don’t overload yourself. There’s only so much you can learn in one day.

Wait, isn’t this a blog about driving? I had better say something about that!

There’s a reason for this progression. When you’re starting out, not only do you not know what balance is in the context of driving a car, but there are only tenths of seconds to be gained in optimizing how you interact with your suspension while there are multiple seconds elsewhere. As the title says, balance takes time. It also happens to make time. More on that next week.