Have you heard of an Exomotive Exocet? I’ve sort of drooled over photos of these and other kit cars for some time. They look so damn cool. Exocets are built from Miatas, which are a personal favorite. While Miatas are pretty light cars, tipping the scales at around 2200-2300 lbs, an Exocet is only around 1500. At the start of the day, I was trying to choose between an ND Miata and an Exocet. I haven’t been in an ND on track yet, and was eager to check one out. I imagine I might own one some day. But how often do you even see an Exocet? Almost never. So I decided to choose the student with that car. It turns out it’s not his car, but a buddy’s. 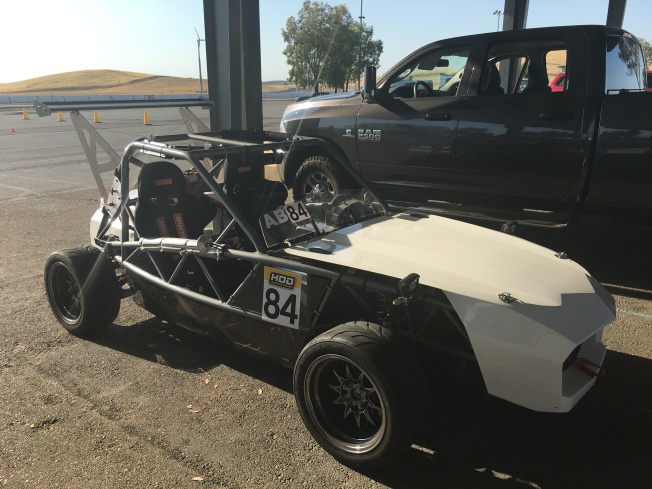 My first experience with the car was on the skid pad for the figure 8 drill. Given that the car had the stock 1.8L engine, it wasn’t a tire burner. But the student did get to practice some oversteer and recovery. The car felt safe and fun. Then I went out with the owner in the B session and changed my mind entirely. I had an open face helmet, and the wind was really uncomfortable at 100 mph. It was so loud I couldn’t audibly  communicate with the driver. It didn’t feel at all safe. I made the mistake of hanging onto the frame at one point and got thwacked by a piece of rubber. Ouch.

I decided I couldn’t coach in that car unless I made some kind of change. I switched to a closed faced helmet and put Senna bluetooth radios in both helmets. What a difference. Problem solved. In the first on track session with my student, I drove 2 orientation laps to talk about the flag stations and such. So how does an Exocet feel? Not so different from a Miata actually. It was a little too light in the rear, which doesn’t make for an ideal car for a novice student. The major problem I had with it was the position where the A pillar bar meets the floor. The tube ends up very close to the left foot and there’s no room for a dead pedal. I’m really used to anchoring my left foot on a dead pedal. What was I supposed to do with my left foot? Hover over the clutch? Rest under the clutch? Who builds a frame that prevents proper foot positioning? Exomotive does. Maybe they expect you to reposition the pedals to the right?

Building an Exocet costs in the neighborhood of $20K and takes hundreds of hours of labor. In the end you get a unique car that is a real head turner. But let’s be clear, it’s not the ultimate track weapon. If you’ve already got a Miata, you could run circles around an Exocet with a turbo upgrade. But for the price of a Miata and turbo, you’re also be in the neighborhood of other excellent track cars like Acura RSX Type S, BMW E46/Z3/Z4, Nissan 350Z, or Porsche Boxster.

Over the course of the day, my attitude about the Exocet evolved as follows

There are a lot of reasons for owning a sports car. I don’t think any of them are about how practical the cars are. In fact, some of their appeal is their lack of practicality. The main appeal of sports cars, in my opinion, is how they make you feel. That feeling should be special. And if you’re the kind of person whose mantra is “built not bought” then an Exocet is going to make you feel doubly special. I would never build an Exocet myself. I’m a driver, not a builder. Heck, I’m not even a sports car enthusiast. But there is a part of me that is 100% on board with what this represents.

Thanks Colin and Mike, the Exocet made my coaching day special.

2 thoughts on “Coaching in an Exocet”