Did I really start YSAR 3 years ago? Well, this is post #156, so I guess that’s a fact. If you’re a YSAR visitor I want to say thank you for reading. It’s been fun sharing my thoughts with you. This week I want to reflect on a few related posts from the last year to create some kind of synthesis.

Last October, I wrote a pair of posts about the fastest line through a 90° corner. Does the line change if the car is a Miata vs. Corvette? Does it change if you’re on a race track vs. ice? I “solved” this problem using a simple-ish formula with circles of various radii. Turns out, if you’re driving a Miata, yes, the line matters a lot. Take a late apex most of the time, but make it a little earlier in faster corners. If you’re driving a Corvette, the line doesn’t matter that much. Driving on ice? The typical late apex is the worst line and early apex is the best. Huh? When you have no grip, and therefore no acceleration, you might as well keep your speed as long as possible. 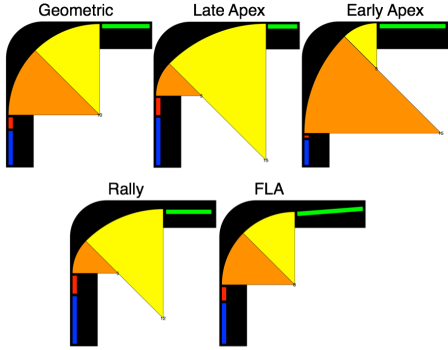 In December, I wrote about the theoretical fastest path around a pair of cones. Should you drive a tight radius to minimize distance or large radius to maximize speed? Once again, I put some math to this problem and it shows that a tight radius wins every time. The only exception to this is if you’re not allowed to use your brakes.

These theoretical posts above were based on the typical tire model that states “there’s only so much traction, and you can use it for cornering, braking, or some mixture”. A little later I wrote about how the traction circle isn’t a circle (or a diamond, which is another valid way of drawing it). That is, grip can’t simply be divided into braking and cornering. There’s more traction available for cornering than braking, and mixing them a little is better than not mixing them. So trail-braking and early throttle application are techniques one should try to master because they maximize the use of your tires. 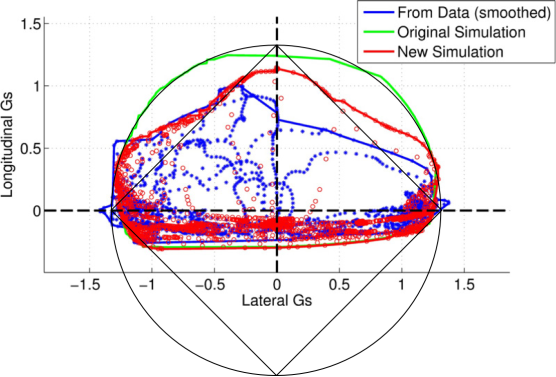 So the theory isn’t quite correct, but does the model hold up well enough to be useful? Is the shortest path around a pair of cones the fastest? I got to test this on a skid pad in August, and the answer is yes, the shortest path is fastest in the real world. If there is a long straight afterwards, then a late apex will win. When optimizing corners, it really comes down to a question of the straight that follows the corner. Is it worth throwing away some positional advantage to gain a speed advantage? Shortest path or largest radius?

So what’s my point in reviewing these posts? They were a great learning experience for me. I enjoy bouncing back and forth between theory and practice. When it comes to performance driving, the learning is as rewarding as the driving. As we start heading into the racing off-season, I urge you to read a book or two on racing. Brush up on the theory and see if you can put it into practice. For my homework, I just purchased Keith Code’s “Soft Science of Roadracing Motorcycles”.