This weekend, I raced in a 12 hour ChumpCar race at Thompson Speedway Motorsports Park with my twin brother’s car on team “Occam’s Racer”.

With the exception of Thunderhill, every time I’ve driven a track, I’ve practiced it first in simulation. The Thompson Speedway road course isn’t in any simulation. So that changed how I approached the learning process. In simulation, my first sessions are driven very hard. My primary goal is to catalog the dangerous parts of the course. A violent wreck tends to stick in my mind. Obviously, that isn’t my plan in real life! What follows below is sort of a journal of how I prepared, practiced, and drove in the race.

I’m watching about 7 videos. Some are races and others HPDE sessions. A few are really good and worth watching multiple times. I’ve got a track map that I’m marking up. The first priority is always to find the flag stations. For the most part, these are line-of-sight, low, and near the middle  of corners. The exceptions are T3, which is elevated, T5, which is on the backside of the turn after the bridge, and T10, which becomes visible on the inside as you approach the exit. Making a mental note of the flag stations will be the first thing I do when I go live. Here are my initial thoughts on the turns.

T1/T2 – Reminds me a bit of Summit Point. Starts very slow and then increases in radius as a single corner. 2nd gear shifts to 3rd in T2. Get the braking and turning done early and turn this into one long opening corner.

T3 – Still Summit-like with a slightly early apex 90° that goes a little off camber and blind at the exit. Reminds me a little of Willow Springs T1.

T5 – Another 180° but slightly faster. Seems that one could go late apex, double apex, or tight. I feel like double apex is the default. There is some straight following, but not enough to prioritize exit speed over position.

T6 – An even larger 180°. A single late apex is expected as there is some straight afterward, but I suspect going around the inside is going to happen more often than not in a race. The track out gets close to the wall only at the very end.

T7/T8/T9 – The most interesting sequence of the track. T9 is critical because it sets up the main straight. If the car isn’t at the limit in T9, it means that T8 or T7 were messed up. The approach to T7 is to let the car create space as it passes the wall on the left. Trail-brake around and completely sacrifice the exit. The key is to get the car parallel with the curbing for the T8 entry. Straighten out T8 as much as possible and get on gas as early as possible. Start building speed before the T8 apex and keep building it. Track all the way out and stay out to set up T9. Diving too early into T9 will require lifting at the exit, which will kill the top speed. This whole section requires some discipline to get right. I’m really looking forward to this sequence.

T10 – Not really a turn, but the start of the main straight. 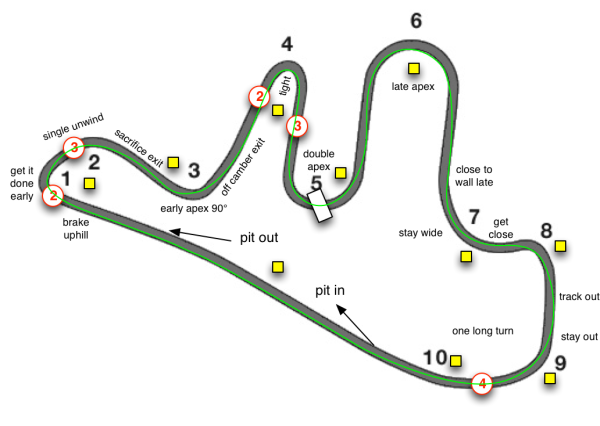 T1-T2 – Brake between the 4 and 3 marker. There’s positive camber here, so grip is good. It turns downhill halfway through, so you really can’t hold trail-braking around or the car will over-rotate. Better to get shit done (braking, turning) early and then add throttle to stabilize the rear.

T3 – I didn’t do this corner correctly even once. It’s just a 90° left. Oddly, I sometimes thought it was T5, and went in thinking I was going to double apex it. I’m mad at myself for not finding the right reference points for this. On race day, I’ll have to make sure I focus on this corner.

T4 – It’s as tight as expected. It drops in elevation toward the end similar to T1, and it’s also important to get shit done early. There’s some throttle modulation required to maximize traction.

T5 – Indeed, this is a double apex. I saw a lot of cars throwing away time trying to enter too wide. The angle at the 2nd apex is critical to get right as the wrong angle could send you off track. I may try to go a little deeper tomorrow to get a better run into the 2nd apex.

T6 – A bit of a puzzle. It definitely felt faster going wide at the entry. But I also found I could put some distance on other cars going in tight. Maybe it doesn’t matter.

T7 – This is one of the best examples of a Type II corner I’ve ever experienced. I brake very late and totally sacrifice the exit. It’s a good passing zone as timid drivers will dawdle on the right side. Brake AFTER the ripples in the track.

T8 – I’m on the gas before the apex, and I feel that I should be able to commit to 100% throttle even sooner. Something to work on.

Mental Imagery (MI) is Ross Bentley’s thing. I generally don’t do that much (sorry Ross) because I find that simulation fits me better. But of course I don’t have Thompson Speedway in any sim. So time to do some MI. To get myself in the mood, I’m going to queue up some helmet cam footage I took during the practice session (helmet cameras are not allowed during the race but I didn’t hear anything about no cameras in the practice session…).

The race did not start well. On the opening lap, my brother Mario said “just let that guy by” as we watched an overzealous BMW e30 bullying his way through the first couple corners. About a minute later, our car comes into the pit dragging part of its diffuser. The driver, Patrick, had to dodge the BMW when it spun in front of him, and the subsequent trip into the grass yanked on the leading edge of the diffuser. Then the pit marshal came over and told us our transponder wasn’t working. So we had to make 2 minor fixes before completing even a single lap. On the plus side, the demeanor of the team became more relaxed as we had already lost the race. Now we could drive unencumbered with the thought of winning our class.

Patrick put down a lot of solid laps with a few times in the 1:29s. I got in next and started a string of 1:30s and a few 1:29s. I thought to myself “I think I’ve got a high 1:28 in me”, but it wasn’t until the end of the session that I did any. For most of the race, I was content to hook up with a car making a decent pace. At one point this was the Ztech Racing Honda Accord. Later it was an RX-7 that had the misfortune of smashing through a tire wall during the first hour. The corners where I made up the most time were the double apex T5 and the T7-8-9 combo. I often got enough speed out of the last section that I could stay in the draft of the higher HP cars down the main straight.

It took me a while to figure out how to optimize the 2nd gear corners and also the bowl (T6). But once I did, my lap times were dropping even though I was still driving conservatively. I got a couple 1:28s hit traffic, and then did more. After one really good T1 I decided to go for a flyer and see what I could do. Although I scrubbed too much speed understeering through the last corner and had no cars to draft, I produced a 1:27.29. I’m sure I could do a high 1:26 given another session, but I was running low on fuel and wanted to do some short-shifting laps to see what I could do without ever using 2nd gear. 1:29.59. I should have done that experiment earlier in the day because I probably would have driven it that way instead. Yes, it’s a little slower, but it’s easier on me and the car not to shift so much.

When we refueled the car, it only took 10 gallons. So despite the fuel gauge reading empty, there was still a few gallons left. In a 12 hour race, ideally we would run 6 two-hour stints. So only 5 pit stops. But due to the fuel gauge and cockpit heat (no cool suit), we ended up doing 8 pit stops. With the 5 minute pit stop rule, we lost 15 minutes or 10 laps. And the problems at the start of the race cost us another 4 laps. Ah, to have those 14 laps… Alas, we ended up in 11th place (9th if you discount the EC class cars that aren’t playing by the same rules).

Car: The car was great. There was 1 Miata that was faster and 4 that were slower. The Occam’s Racer Miata was a Spec Miata in a former life and is still carrying at least 100 lbs of extra weight. So there’s some free performance improvements expected down the line. We ran Dunlop ZIIs in 205/50/15 at 40 psi hot. That’s maybe too high for such a twisty track. ZIIs are also not the fastest of the 200 treadwear tires. Not sure if we could get RE-71Rs to last 12 hours though. If we wanted to spend money, we could definitely get more power out of the motor, which is currently just a junkyard replacement. With Occam’s Racer not due on track again until Spring 2018, there’s some time to sort things out.

Track: Thompson Speedway is a really great track. With the exception of the main straight, there is very little breathing room between corners. That makes passing more difficult and more fun. The various small changes in elevation and camber are a challenge to optimize. I can’t wait to return. My small complaint about the track is that it’s a little bit one-note. Long corner, short straight, repeat. There aren’t many puzzles to solve. So the thinker in me was happy when there was traffic to work around. The event drew 38 cars, which is enough to make things interesting, but I would have preferred 50-60.

Racecast: We need to sort out the Racecast camera. We were supposed to be streaming live the whole day but I don’t think it worked at all. Unfortunately, no race footage from our car.

Event: The ChumpCar staff did a great job organizing the event. I wish they had run a few more warmup laps. They didn’t notice our transponder wasn’t pinging until after the race was underway. The Friday practice was not well organized. From the long line-up outside the gate to the practice session that started over 90 minutes late, it was a shit-show most of the day. Fortunately, they have good onsite food.

My Driving: For the most part, I was happy with my driving. I was particularly pleased that I was up to race pace on my 4th practice lap. I did my homework preparing ahead of time and it showed. In the race, I didn’t make contact with any cars, go 2 wheels (or more) off, or lose control of the vehicle. I raced within my abilities and managed to set fast time on the team by 2 seconds. Time to put another track decal on my windshield.