The first time I drove Mazda Raceway Laguna Seca and New Hampshire Motor Speedway was a race lap. No practice laps, just get in the car, buckle up,  and go. It was also the first time I had driven those cars on track (Miata and E36). Talk about exciting! Similarly, the fist time at Willow Springs International Raceway and Carolina Motorsports Park I had only a single 20 minute warmup session before entering the race. It probably sounds a little crazy and unsafe, but I did a lot of simulator homework ahead of time. You can learn a lot about the dangerous and fast parts of a track if the virtual track is accurately modeled.

Track modelers have a variety of resources when building a track. Information may come from topographic maps, LiDAR, or laser scanning. The most accurate track models tend to be laser scanned, but it is neither a requirement nor guaranty for authenticity. How can you tell if a track is realistic enough? You have to do a little poking around. Start by asking in the official forums for the software. I did that and found that only four of the tracks (Brands Hatch, Cadwell Park, Oulton Park, and Snetterton) in pCARS are laser scanned. On the other hand, in iRacing every single track is laser scanned. As a general rule, 3rd party tracks are not laser scanned and shouldn’t be trusted without extensive research. There are cases where people have ripped a laser scanned track out of one sim and put it into another. Apparently the Brands Hatch track of rF2 originally came from AC. That doesn’t sound entirely legal. However, I did download and install Brands Hatch for rF2. I justify this on the fact that I also own the same content in AC (and a bunch of other simulators).

How I learn a new track

Most simulators give you several options to help you learn a track. For example, you can make your car invulnerable, turn on a ghost car, and display a driving line. I don’t use these aids ever. That’s because I find that the aids get in the way of the most important activities:

Destroying my car and starting over is a great negative reinforcement learning tool. If I can keep driving after a crash, it’s sending my brain the message “oops” instead of “never again”.  I don’t like ghost cars or a driving line because it takes my attention away from finding reference points. Anything that puts my mind from an active state to a reactive state interrupts how quickly I learn a track. I don’t want to watch anything. Instead, I want to visualize the next part of the track before I get to it. When driving a new track, I’m having a conversation with myself the whole time. It sounds a bit like this.

“OK, try braking at the seam this time. I’m a little too deep for this car, but I like this angle if I had more HP. Whoops, 2 off. The pinch at the exit is blind, so I’ll have to remember to hold a bit more steering lock on the exit next time. Let’s try double-apexing the next turn to see how that goes. +0.6 going in and +0.4 coming out, so that’s a couple tenths better.”

When learning a new track, every corner is an experiment. To help me analyze those experiments, I like using a lap timer in simulation and real life. My favorite timer is made by RumbleStrip. It has big red LEDs that you can see in your peripheral vision.

My favorite cars for learning a virtual track are old stye Formula cars like the Skip Barber Formula 2000. You want to find all the danger zones on the track, and having a car with a decent power to weight ratio and no downforce will make that easier. Once you’ve crashed a virtual car 100 times on a track, you have a pretty good idea on what not to do.

No matter how accurate a virtual track is, it isn’t the same as actually being there. Some obvious differences include G-forces and the weather. But some tracks are modeled so well that you can become acclimated in a couple laps. Both MRLS and NHMS are laser scanned in iRacing, and they are amazingly accurate. CMP is only available in the original rFactor, but the track was surprisingly good. I admit that the first time through the kink I lifted, but just the first. The rFactor version of WSIR however was not great, and the first time through the omega was an eye-opener and wheel-turner. WSIR is now available in Project CARS, and that version is much better. That said, the pCARS version of Sonoma Raceway is so bad that it would be dangerous to use for training. Don’t drive this track if you ever want to race there in person. All of your reference points and danger zones will be off. I’m assuming that Sonoma Raceway gave permission to use their name. You would think they would require some level of authenticity. Take a look at some screen shots comparing pCARS to iRacing and RaceRoom. The first shot is pCARS looking towards T3a. The POV is about the same level as the top of T3a. In reality, T3a is a good deal higher than the exit of T2. These kinds of errors are all over the track. You know that rise and dip right before T11 that helps you spot the breaking zone? It’s not there in pCARS. Why? There can be no good reason. 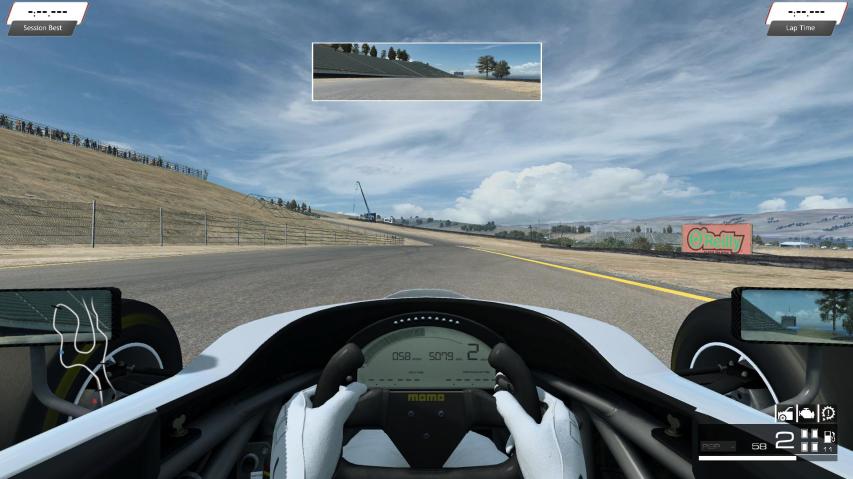 I can’t express the depth of disappointment over the the pCARS version of Sonoma Raceway. I can understand and forgive a certain number of errors in a user-created mod, but official content that you paid for? Inexcusable. How many of the other pCARS tracks are also horribly wrong? This is why it’s important to do a little homework on each track. Try to find out if it is laser scanned. Find someone who has been there and can tell you if the model is accurate. Sonoma Raceway is 45 miles from my house. I’ve been there many times, and I can tell you, this model sucks.